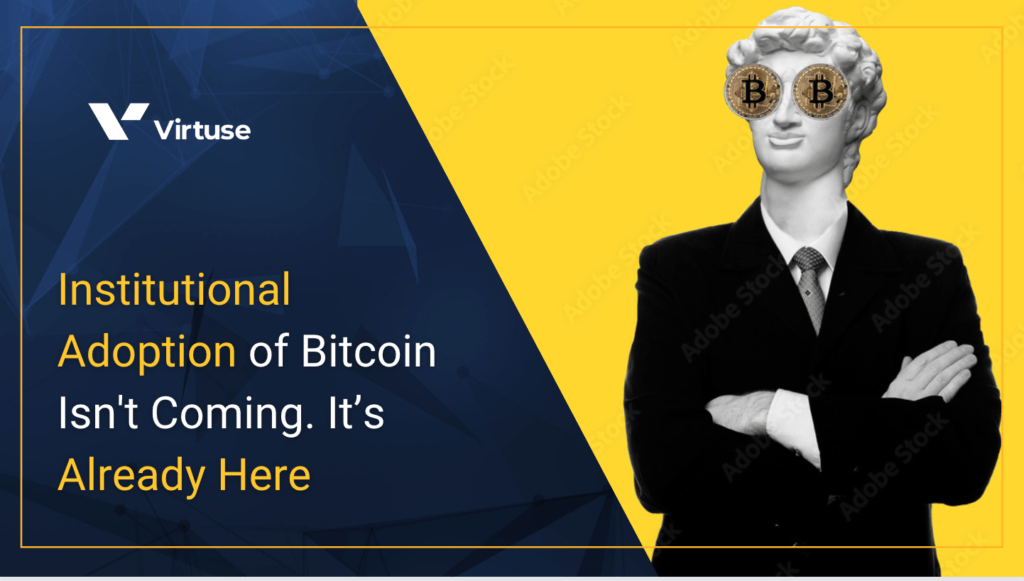 Have institution already embraced bitcoin? What is the rate of adoption? Have regulators endorsed bitcoin?

Institutional investors have tens of trillions of dollars worth of assets under management, and it looks like they jumped on the bitcoin bandwagon.

Blackrock, the world’s largest asset manager, has recently launched a spot bitcoin private trust. And Fidelity, the largest 401(k) provider in the United States, announced it would allow investors to add cryptocurrencies to their 401(k) retirement schemes.

Blackrock and Fidelity alone manage over $12 trillion in assets. If you realize that bitcoin’s market cap is less than $400 billion, it’s hard to overstate how fast institutional adoption of bitcoin is accelerating.

Suddenly, every traditional institution wants a slice of the pie. And bitcoin has achieved what enthusiasts have long wished for and gone mainstream.

The data from 2021 shows that global crypto adoption rose by more than 880% in the year.

A report published by Boston Consulting Group, Bitget, and Foresight Ventures concluded that crypto holders are projected to grow to 1 billion by 2030.

According to the report, digital asset adoption stands at something like the internet in 1998. 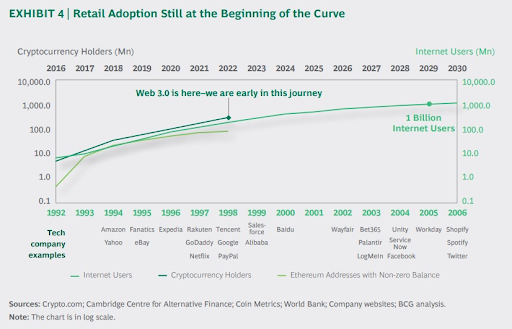 In its early days,

FTX CEO Sam Bankman-Fried said institutional adoption of cryptocurrencies could accelerate even more this year. A lot of the level of activity in the crypto industry in 2021 was “preparatory,” the billionaire said.

Bankman-Fried is not alone in his projections. According to a survey from Bitstamp, a crypto exchange, cryptocurrencies will see mainstream adoption within the next ten years.

The crypto exchange surveyed more than 28,000 investors from 23 countries worldwide. It found that 88% of institutional respondents and 75% of retail investors believe crypto will see mainstream adoption within a decade.

The survey also discovered that 80% of institutional investors reported that cryptos will overtake traditional investment vehicles.

Similarly, a poll conducted by Fidelity Digital Assets found that while 36% of the close to 800 participants had invested in digital assets, nearly 80% specified that they found something “appealing” about them.

Accountants and custodians are prepared

KPMG announced in February 2022 that its Canadian branch would be purchasing bitcoin. KPMG manages the books for over 20% of the Fortune Global 500 companies.

As KPMG Canada’s Managing Partner, Benjie Thomas, said, “This investment reflects our belief that institutional adoption of crypto assets and blockchain technology will continue to grow and become a regular part of the asset mix.”

Crypto custodians are another essential piece puzzle for mass institutional adoption. Institutional investors are typically required to store their securities and assets with qualified custodians.

Therefore, custodians like Bakkt, Bitgo, Fidelity Digital Assets, Coinbase, and Gemini Custody have been game-changers for the institutionalization of bitcoin.

But one of the most crucial pieces of the financial infrastructure is well-designed rules and a level playing field for every participant.

Bitcoin has already been embraced as commodity by regulators such as the SEC and CFTC, or even the head of the US Treasury, Janet Yellen. But, regulatory clarity is still required with the wild altcoin market. El Salvador and the Central African Republic have adopted bitcoin as a legal tender outside of the US. The head of the Central Bank of Brazil has also recently endorsed bitcoin technology.

And the final legal text for the long-awaited European MiCA crypto regulations is set to be released in October.

Bitcoin is emerging as an investment-grade asset.  However, we’re still early.

Institutional investors have unimaginable amounts of capital, and if they allocated even a fraction of their holdings to digital currencies, we might see an explosion in the price.

A quick back-of-the-envelope calculation shows that if only US pension funds allocated 1% of their total assets to bitcoin, that would represent 61% of the total bitcoin market cap.

In a nutshell, if institutions are preparing themselves, so should we.